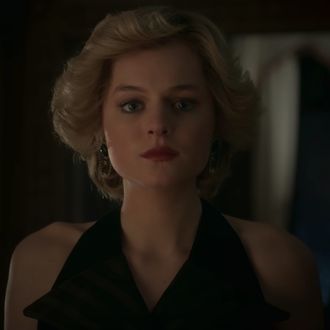 Whether it’s the show’s depiction of Diana’s struggle to assimilate into the royal family, or actor Josh O’Connor’s “punchable” depiction of the Prince of Wales, The Crown’s fourth season covers a lot of ground many viewers were alive to experience in real time. Still, if you’re like us, you aren’t getting through a full episode without Googling “Did this actually happen?” once or thrice about, say, whether Charles really hated Di’s “Uptown Girl” performance that much. Which is presumably why the United Kingdom’s Secretary of State for Digital, Culture, Media and Sport spoke up this weekend and lobbied for Netflix to slap a “fiction” label on the show.

“It’s a beautifully produced work of fiction, so as with other TV productions, Netflix should be very clear at the beginning it is just that,” Secretary Oliver Dowden told the Daily Mail. “Without this, I fear a generation of viewers who did not live through these events may mistake fiction for fact.”

Dowden is reportedly expected to submit a request to the streaming platform asking that each episode of the series carry a “warning” clarifying that The Crown is a fictionalized take on real events. According to the Mail, the request allegedly stems from fears that fictionalized scenes from writer Peter Morgan are “doing lasting damage to the monarchy,” an interesting concern considering the show doesn’t even include Prince Charles’ “Tampongate,” and a lot of us had to live through that IRL.